Back in February, I was invited to Bhutan to attend and help out with the inaugural Bhutan International Festival (BHIF).  It was an amazing experience in one of the most incredible countries that I have ever visited.

Even on the airplane from Delhi, I knew that this was going to be a particularly special adventure. We gorged on the staggering views of the Himalaya from the airplane as the crystal clear dawn was rising. The decent into Paro airport was equally breath-taking.  Only a handful of pilots in the world are qualified to navigate through the steep valleys of Bhutan. With the plane banking severely one way and then suddenly another, our view of Bhutan before even landing was exciting to say the least! Upon landing, everyone disembarked and exploded with delight. The sight of a hundred people on the runway hugging and high-fiving with huge grins, surrounded by the beautiful backdrop of giant snow-capped peaks, is something that will stay with me forever.

Bhutan is a remote, landlocked, Buddhist country nestled between the giants of China and India.  For decades it took a path of isolation, preferring to preserve its traditional way of life untainted by the relentless march or globalisation and modernity.  The king and government realised that it was untenable to continue this way and Bhutan has slowly been opening itself up to the wider world, but it has been trying to do so in a manner that keeps its traditions intact and central to the culture of the country.

The internet and television was introduced to Bhutan in 1999.  Now, an entire generation has grown up with almost unfettered access to the wider world, including the world of music and the arts.  There are new and bold ambitions amongst the people of Bhutan, especially the youth, but very few outlets, places or events through which they can express themselves and develop their skills.  BHIF is an ambitious project to build a platform on which all of this can happen.

The Bhutan International Festival is a celebration of photography, film, visuals arts, music and dance.  It presents many Bhutanese artists as well as inviting world class international photographers, film makers and musicians to perform their work and to collaborate.  Over the course of 10 days, Thimphu, the capital city, was filled with events including an international film festival, two outdoor music stages, photography and visual arts exhibitions, workshops, seminars, a food festival, TEDx talks and dance classes.  Thimphu was abuzz with creativity and a hive of cultural exchange.

The event was a massive success!  All of the artists were welcomed by excellent audiences and everyone considers the event to have huge social and cultural value.  The event was produced on a complete shoe string budget and was a massive learning experience for all involved- looking back; it was a minor miracle that it happened at all!  I helped out where I could by offering advice and filling in gaps within the skeletal production team, but the main reason why I was invited was to look towards the future and the development of the festival. And what an exciting future it has!

Since the Festival took place, we have been discussing many things including ways to make it properly financially viable, ways to build a more permanent and year round relationship with the country and its artistic community, ways to bring the diverse Bhutanese arts to the wider world and ways to facilitate knowledge transfer in performance, arts and event production.  A central aim is perhaps emerging: to get to a stage where this kind of event could be created and delivered with no external assistance at all- a truly Bhutanese event from conception to production based on their profound values of humility, empathy and sustainability that we can, and should, all learn from.

I very much hope that myself and Kambe can be a part of the future of this incredible project! 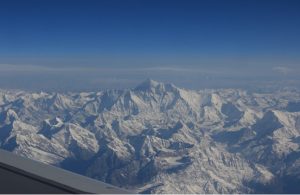 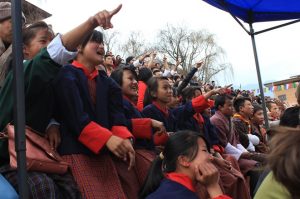 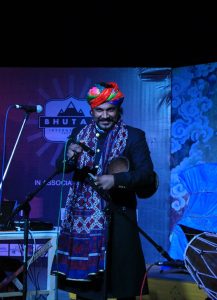